U.S. silver imports remained strong during the first quarter of the year, with March posting the highest monthly volume.  Not only did the United States import the most silver in March, it nearly accounted for one-third of estimated monthly global silver mine production.  That turns out to be a great deal of silver, especially when comparing it to U.S. gold imports during the same month.

Total U.S. silver imports for the first quarter of 2021 equaled 1,560 metric tons, up 41% versus the same quarter last year.  In just the first three months of 2021, the U.S. imported over 50 million oz of silver.  Now, compare that to the 41 metric tons of U.S. gold imports for the entire quarter… it doesn’t even compare.  Moreover, U.S. gold imports for Q1 2021 are 52% less than the same quarter last year.

As stated above, U.S. silver imports for March totaled 627 metric tons (mt) versus the estimated 2,151 mt of average monthly global silver mine supply.  Thus, the U.S. imported nearly one-third of the global mine supply that month. 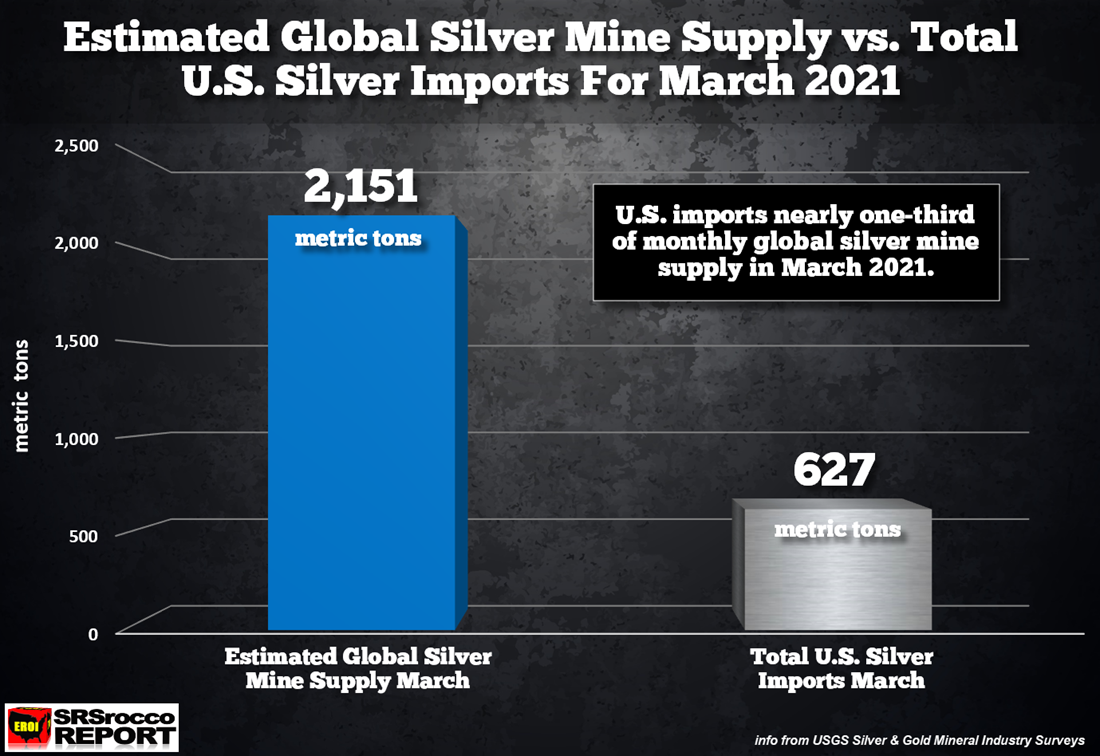 The increase in U.S. silver imports in March was likely due to the strong investment demand after the WallStreetSilver SilverSqueeze event that took place in late January and early February.  As more investors move into silver to protect wealth in the future, supply may become an increasing problem, especially as the world hits the SILVER PRODUCTION CLIFF over the next 5-10 years.  To read the article, click on the image below. 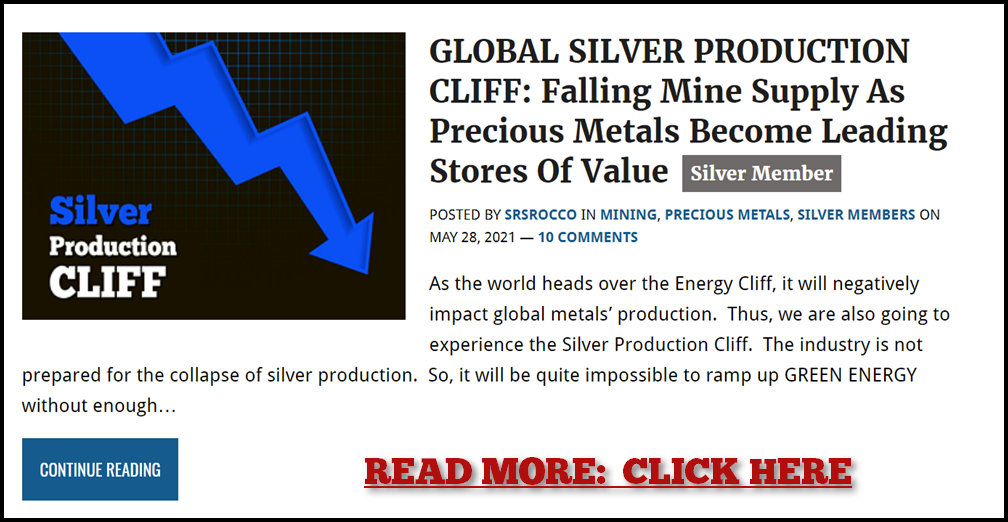 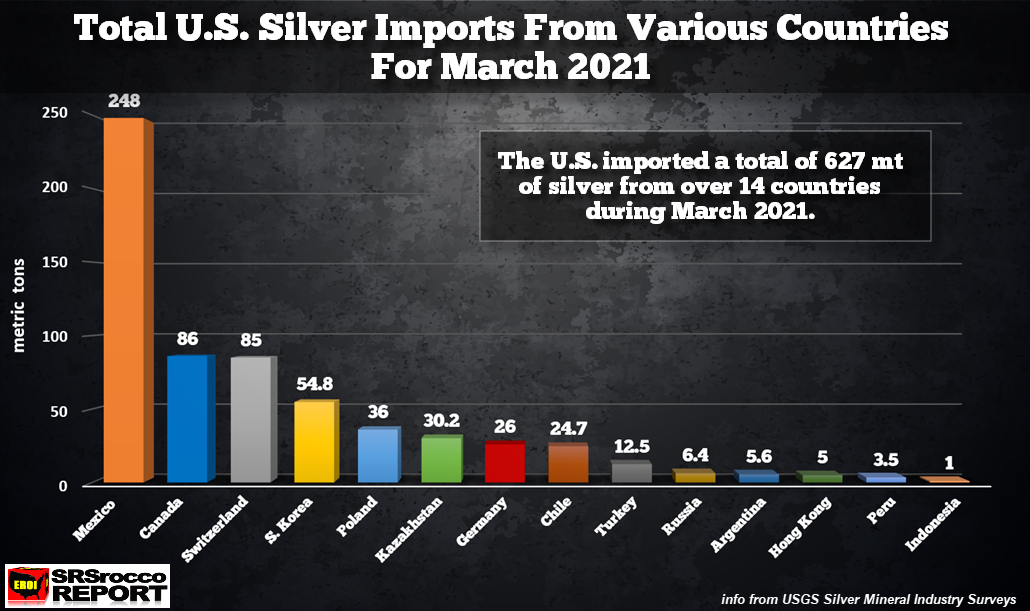 According to the 2021 World Silver Survey, of the 33.3 million oz of Canadian Silver Coins & Medals produced last year, Canadians only invested 7.9 million oz of silver bullion.  Thus, with U.S. physical silver investment of over 78 million oz in 2020, most Canadian Maples are being exported to the United States.  So, 86 metric tons of silver imports from Canada this March equals 2.7 million oz.  That seems to be an accurate number of Royal Canadian Mint silver bullion products imported and purchased by Americans.

With Silver Maple Leaf premiums for 2021 coins averaging about $7.50 per coin, that’s mostly due to strong U.S. silver investment demand.  I would estimate that of the 33.3 million oz of Canadian Silver Coins & Medals produced last year; the U.S. likely purchased 60-70% of that figure.

Because premiums continue to be quite high for many official silver coins, investors are also moving into the different Silver ETFs.  As I stated in my Gold Member short report, Institutional ownership of the iShares SLV ETF has hit a record high, especially compared to the lackluster GLD Gold ETF demand.  Not only that, but we also see a surge of Institutional ownership of the Sprott PSLV Silver ETF.  To read more, click on the image below. 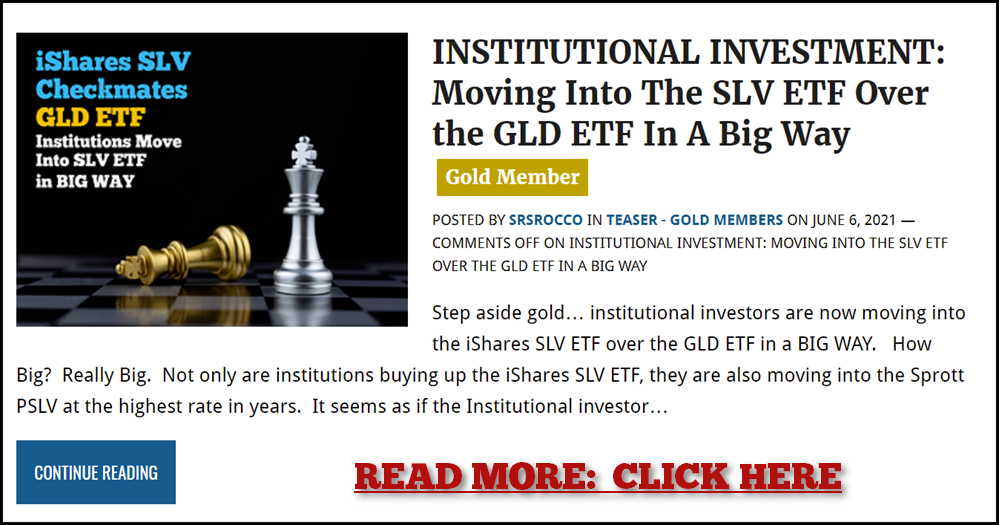 Not only are U.S. investors more interested in the iShares SLV & PSLV Silver ETFs over the GLD Gold ETF, silver imports greatly outnumber gold by a wide margin.  According to the USGS most recently released Gold and Silver Mineral Industry Surveys, the U.S. imported 627 mt of silver versus only 16 mt of gold in March. 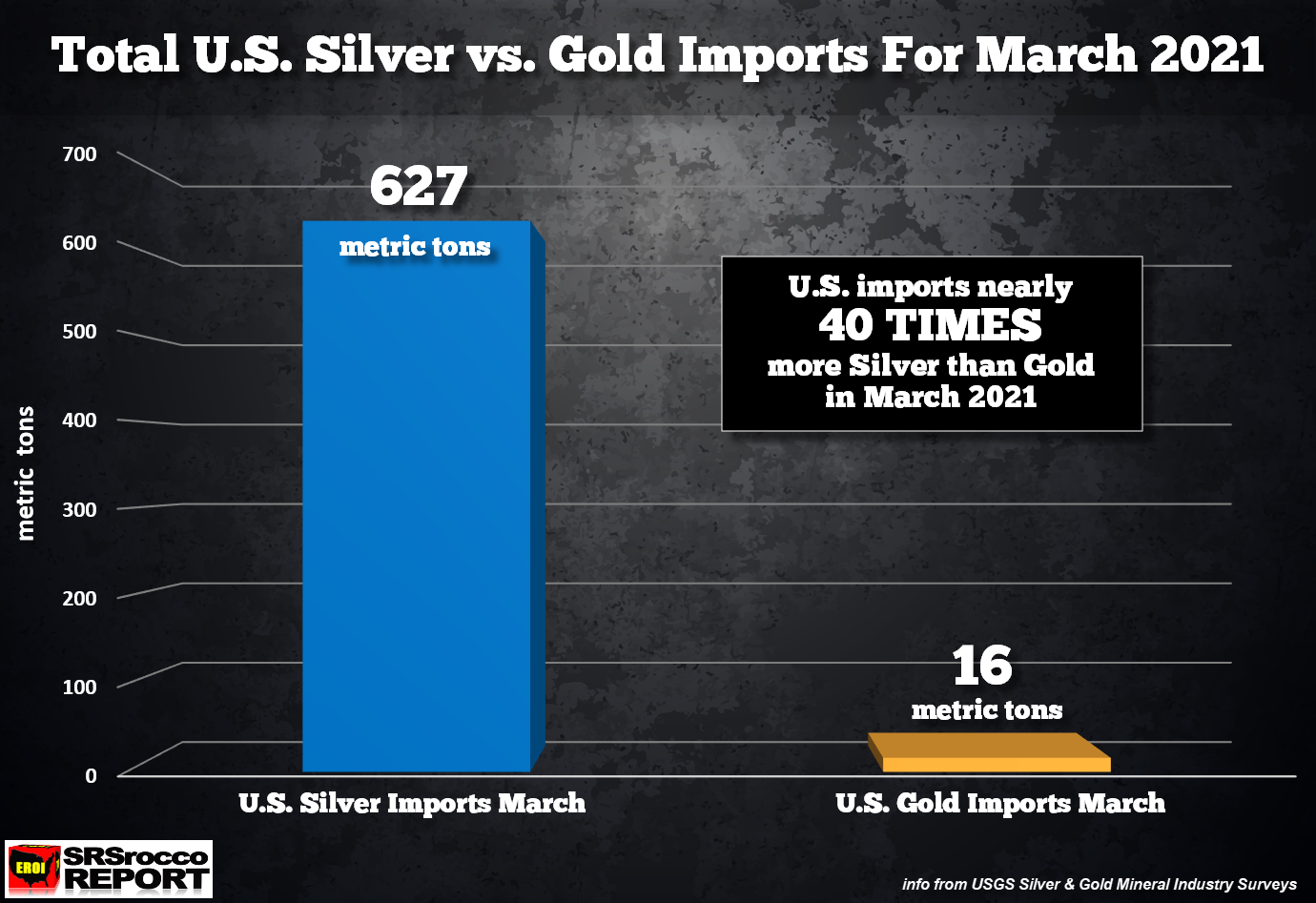 If U.S. silver imports continue to remain strong for the rest of the year, it could account for more than 25% of the global mine supply.  Forget about China; Americans are the BIG SILVER INVESTORS.  Last year, Americans purchased TEN TIMES more physical silver bullion at 78 million oz of physical silver compared to only 7.7 million oz for the Chinese.

Lastly, investors who are quietly acquiring silver today will be happily rewarded in the future when more of the world’s investors wake up to the amazing SILVER STORY.

Americans Are Leading The World By Hedging Their Bets In Silver